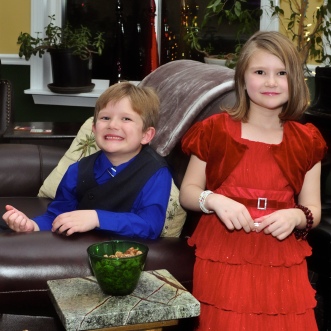 My children in their holiday finery.

I had one of those jaw dropping-awesome-can’t believe it-my heart is gonna burst moments over Christmas. Parenting is often hard, but mostly, as my mother-in-law says, it’s chronic. You can go days without really thinking about significant problems, without savoring that special moment, without realizing what an impact  you are having on your child, or perhaps greater, the impact your child is having on you. Those times when parenting is hard, you feel it in your gut, in your toes, in the cracks and crevices of your heart. But those times of knowing, of getting something right, it’s like…the whole world opens into a big wide embrace, and those cracks and crevices in your heart are filled. Those are the moments when we are offered a glimpse of what our hard work is becoming, the mystery of a beautiful person in progress. And man, those are the moments that make it all worth it.

We traveled this year, as we often do. One of our highlights is the annual Christmas Party at my in-law’s house. It’s big and it’s festive, full of peppermint bark and twinkling lights, the cold rush of air and the warm hug of an old friend.  My daughter, age 8, was particularly looking forward to it.  We spent many a drive to school discussing what time it would start (6 pm), who might be there (so many I can’t even name), what she and I would wear (a fancy new red dress/black pants with my  new scarf), what snacks she might eat (yes to cookies, no to any chocolate with nuts), how late they’d be allowed to stay up (10, maybe 9:30?)…you get the idea. When big night finally arrived I was so proud to see her, looking very fashionable and very grown up. And handling herself so ably! Every time I turned around, she was endearing herself to another group of adults, regaling them with stores of her awesome school (Plumfield Academy, which is totally awesome), and chatting amiably about the books she’s reading, the things she likes to do, and of course, her beloved doll, whose current name is Emily.

Yes, I was marveling at her maturity, wondering at the passage of time and in general, entering dopey gaga mom phase. That’s when it happened. I overheard the most remarkable conversation between her and a relative a few years younger than I (it’s complicated, but my best guess is he is my step cousin in law by marriage). He loves kids and was thoroughly enjoying the conversation; I was engrossed watching the two of them when my daughter piped up with this: “I have the gift of kindness, you know. And love.”

Before I could really register the magnitude of that statement he was nodding, “Tell me more.”

“It’s my gift. I am so kind to the people in my class even when some of them are mean.” He nodded again and said, “I can definitely see that about you.”

They went on to other topics, and she made several rounds with new friends before we finally corralled she and her brother for bedtime. But my head was still spinning. This wasn’t just another spike on the cute-o-meter, this wasn’t merely a pat on the head, pinch on the cheek sweetness. This was a glimpse into her inner self  (she isn’t savvy enough to put on clever masks yet; while that day is coming we really try to savor and preserve these days of youthful transparency).  That glimpse of her inner self revealed an ongoing message both positive and proactive. Let me tell you: That. Is. Awesome.

That inner tape, what you say to yourself when you make a mistake: “Gah, I’m such a loser/dummy/idiot.” vs. “That was a dumb thing to do!” is about your core identity. (Have you seen Brene Brown talk about shame?) To have a positive message that plays over and over in your head, ultimately drowning the relentless drumbeat of negativity around you, that is a true gift indeed. I can’t imagine a much stronger defense in our world of “not enough” than to be “certain enough” of who you are.

A positive message is better than a negative one, yes, but what I really love about this tape that plays for her is that it’s both proactive and receptive. The gift of kindness, like any gift, is to be received. Like most gifts, much of the joy of it comes in the sharing. She receives the gift, and shares it with her classmates. She didn’t choose to be given this gift, but she does choose to act on it. That is the beautiful and mysterious thing: her best asset, the way she sees herself, ultimately has little to do with her. It’s about the thing – kindness – and how she is a conduit. In a world where women are judged by appearance and men by performance; in a world where kids are falling ill due to unbearable pressures from all around them; in a world where we are fed, both by ourselves and from others the steady diet of “not enough”; in a world where the gap between the haves and the have nots is speeding wider by the minute; kindness is the much needed balm. This might be her gift to the world.

8 thoughts on “The Gift of Kindness”

Summer and bees are here!
Went to the Hamilton Block party last night and caught the fireworks, which were spectacular! #summerevening #fireworksbeforethe4th #lovelyday
The view from my porch this week, up in Vermont! #solovacation #vermontmountains #moodyweather #lotsoftimeforreflection
Not sure I’ve ever seen a tulip like this before. It’s a beautiful strange mix of delicate and rugged. Like a biker jacket over lace, or flowered skirt over doc martins. #whatkindoftulipisthis #naturalmassachusetts #blooming #springtimecolor
Nothing says springtime like an overflowing bouquet of fresh lilacs! #backyardbeauty #springtime #lilacs #naturalmassachusetts
Somehow I never noticed the marsh on the other side of the parking lot at the YMCA! Very beautiful spot. #ordinarybeauty #naturalnewengland #naturalmassachusetts