The last few weeks, I’ve noticed a serious cobweb situation developing on our  porch. I realize, of course, that we live (practically) in the woods, and a few spiders come with the territory.  A few.  But I’ve seen more than a few, and some of them have been big suckers.

The other night, as I was calmly explaining to my children why they couldn’t sleep in my room for the 84th night in a row, my son squatted down to look at my mattress. “What?” I demanded, irked that something was drawing his attention from my riveting commentary on their need for sleep. He looked up, unsure if he should answer. “There’s a spider on your bed…”

I got out of my side, stalked over to where my son was pointing and saw a very. big. spider. Double great. Ian was out for the evening, which meant I had to gather my courage and a paper towel, and squish the giant arachnid – I had to move fast enough so he wouldn’t scrabble anywhere else on my bed, but not so fast as to crush him into the sheets either. All this while glaring at the kids, and hopping from one foot to another in anticipation of the grossness.

Miraculously, I managed to complete the Mission:Impossible. I crumpled the bug-in-the-paper-towel and decided to risk flushing it (I could imagine the not quite dead spider lurching out of the trash can to come and take revenge on me while I slept). After I explained through gritted teeth that I wasn’t mad at my kids, but thankful that they pointed out that spider (I really, really wouldn’t have liked that crawling over me in the dark), I decided to take back my house from the eight-legged fiends. 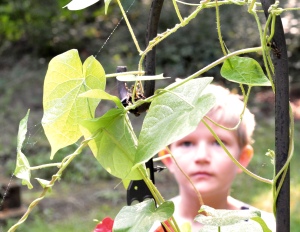 Armed with an “outside duster” (aka, the yucky one that came with the house) and my swiffer, I prepared for battle. No more would the growing, sticky webs mock me! I dusted, I swiped, I swabbed, I pulled, I finagled, I pushed, I wiped and I jimmied. Around our side porch, I dislodged about six relatively small spiders, and shooed them to the bushes. I wasn’t out for blood (despite the unfortunate incident in the bedroom):  I merely wanted to disrupt these creatures so that they would make their webs elsewhere and I can pretend to be a good housekeeper.

I took my weapons around the house – the back door, the windows, under the balcony. That’s where I saw a giant hairy spider, with a body the size of a quarter. It took me a few breaths, and a renewal of my vow to disrupt, not dismember. Then my son started looking at it. He was fascinated, but not enough to try and capture or move it. It took some slick maneuvering on my part, but I finally found a loose thread of its silk, and flung it to the other side of the yard. I haven’t seen it since.

I have however, seen its smaller, harder cousins. And apparently there is a large extended family reunion, or something, on the property, because Shelob and her sister have a nice little den of webs on the other side of their house. My swiffer is an effective cobweb removal device, but all it does is allow me to jab uselessly at the spiders hiding in cracks. I do, however, feel slightly better after talking trash to the relatively harmless but irritating pests.

I repeated for several days the routine of circling my house, an old blue duster in one hand and my swiffer in the other, waging war on the webs. While the webs appeared each morning (those are an industrious breed of bug, that’s for sure), they were fewer and fewer. With each pass round my house I was able to move a few more spiders to the bushes or the backyard (I can neither confirm nor deny that any spiders were killed during the production of this blog). In short, I was feeling pretty darn good about the situation. And then…

“Honey?” my husband called up the stairs. With a sense of dread, I called back down.

“I think you better bring that duster down here. We’ve got a situation developing in the corner.”

With resolve, I marched down to find the corner full of daddy long legs, faint drifty webs, moving whisps as the spiders scurried around. There were also piles of teeny black things…mouse droppings? Something bigger? Upon closer inspection (I had my weapons, and Ian had his – a roll of paper towels and some spray cleaner), we discovered that they were fly carcasses. Major eewwwwww!  It took us about half an hour to scour all the corners, but we managed. Working with a partner who did not share my “disrupt, not kill” mantra was very satisfying, I must admit. At any rate, we can sleep a little easier tonight knowing that the corners of our house – inside and out – are freer from the eight-legged pests that have plagued us this summer.

Update: Last night we pulled into our driveway after dusk, and my son yelled: Look at that giant spider! So, of course, we not only looked at it, but I illuminated it with my phone while Ian snapped a few photos of it. Like I said, I don’t mind if they are on our property, I just don’t need to see them at my door!

Glorious fall afternoon, unseasonably warm, light falling and filtering through the trees, catching me off guard and leaving me a bit breathless in wonder. #beautifulfall #backyardbeauty #ordinarylife #ordinarybeauty #naturalnewengland
Summer and bees are here!
Went to the Hamilton Block party last night and caught the fireworks, which were spectacular! #summerevening #fireworksbeforethe4th #lovelyday
The view from my porch this week, up in Vermont! #solovacation #vermontmountains #moodyweather #lotsoftimeforreflection
Not sure I’ve ever seen a tulip like this before. It’s a beautiful strange mix of delicate and rugged. Like a biker jacket over lace, or flowered skirt over doc martins. #whatkindoftulipisthis #naturalmassachusetts #blooming #springtimecolor
Nothing says springtime like an overflowing bouquet of fresh lilacs! #backyardbeauty #springtime #lilacs #naturalmassachusetts