This is the fourth installment of a series on the color brown and seeing things as they really are. Read the other posts. 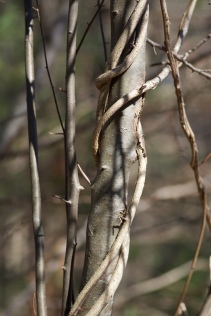 I love lists. Groceries, errands, things to get done today, next week, this year…having things all spelled out in an orderly fashion soothes me. Checking things off my list is immensely satisfying. That may be why all the twisty branches stuck out to me on this walk. It was not a soothing sight at all, but I pressed into noticing all the branches that were not..orderly.

Some vines twisted their way up a tree, around and around and all the way up.  I paused, speculating on the choking effect that this might have on the tree itself; with no greenery, it was very obvious which vines were the hangers on. I suppose that it would be easier to pull apart that which did not belong in this season of brown. 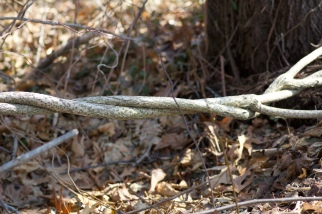 Another set of intertwined branches went completely sideways! This also gave me pause, and I pondered – how did they get connected? What on earth pulled them sideways instead of up and down like “normal” branches surrounding them? Where was their support? Some them just went sideways, for no discernible reason. 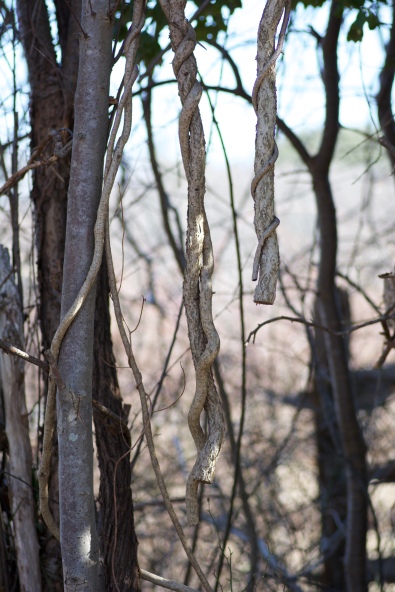 I then came across an unsettling sight – numerous branches intertwined, around and around and then seemingly cut off and hanging, just like, that in mid-air. At first I was annoyed. How dare those branches get tangled up and then…not have an ending. The nerve! But then I had to laugh out loud, wondering how often I get tangled up, worrying or thinking about something, only to come to an abrupt “end” – or realization of the silliness of my tangled thoughts.

Another image stopped me in my tracks.

It completely struck me as the perfect image of the past, present and future. You can clearly see the outline of what was – beautiful vines flowing down, perfectly capturing what had been. At the same time it provides a framework for what will be next season; a similar but unique expression of nature’s delight and life, flowing with promise and fullness.

What it is now is something just as beautiful in it’s own right. Brown vines, holding the place between yesterday and tomorrow, bringing us into the present moment.

And what a gift that is – to be able to see the moment, held aloft, as it were, by the branches of the past with vines pointing toward the future.

2 thoughts on “Brown Part 4: Tangled up”