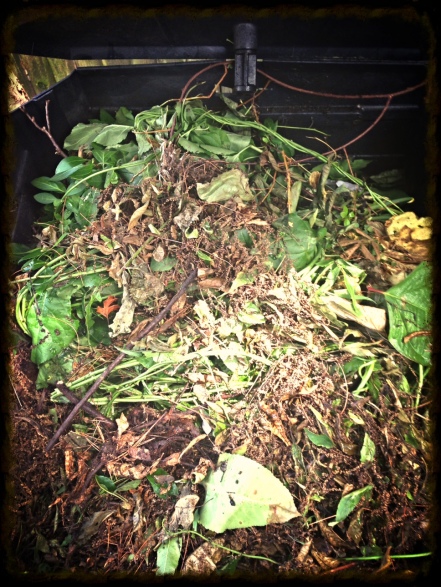 I’ve been through a lot with compost and it all started in New York City. I’d been thinking quite a bit about composting, feeling enviro-guilt about tossing all my vegetable scraps, wanting “black gold” for my plants & gardening activities, mulling over ways to accomplish both goals. In a conversation with my mother-in-law, she mentioned that she had one of those cool kitchen composting machines that heated and churned kitchen scraps and did I want it? Heck yes I did.

My husband tolerated having a machine in the kitchen that was always slightly smelly, slightly grinding, and slightly oozing brown sludge. I overcame the gross factor by sheer force of will, diligently adding browns (newspaper, sawdust pellets) and greens (lettuce, vegetable scraps) to the mix, emptying the muddy sludge into large yogurt containers on our window sills. Sadly, we weren’t in NYC long enough to produce any compost that I could use (the brown sludge still had to air out and develop into dirt). When we moved to rural New Hampshire, the machine came with and I started over.

The machine stayed on our deck outside and became the starting point for a “real” compost pile in the woods next to our house. I diligently added browns and greens to the machine, lugged the tray full of brown sludge to the base of the tree and dumped it and worried about bears. Apparently when bears emerge from hibernation, the smell of anything seems good to them – even, or especially, warm rotting food. A falling ice sheet crushed my worries about the bears when it crashed onto the machine.  Gone were my sludgy efforts, dashed to pieces like my precious, stinky machine.

Well, I could at least add to the pile outside and let nature do its thing even without the aid of modern machinery. The kids really got into the process, as it involved flinging dinner scraps into the woods (and it was somehow extremely satisfying to hurl grapefruit rinds from the  deck toward the pile after breakfast).  We did notice a few critters lurking about in the woods, but they weren’t near the house and I figured that that fox might actually never have had citrus before. Besides, any scrounging was all part of nature’s system, right?

Sadly, we moved from New Hampshire before I could use any compost from my pile. I bet if I went back to that spot now, it would be a mound of black gold….In the meantime, however, we settled into our spot here. It’s a cute little New England town, and as such I have access to a teeny spot of land on which to grow some vegetables and a few flowers. I decided last summer to buy a compost bin and put it in one corner of my garden area. Again I started the process, diligently adding browns and greens, feeling free(er) of the enviro-guilt as all of my lettuce scraps, onion ends, carrot tips and apple cores went not into a plastic garbage bag to produce methane and clog up landfills but straight into the compost. This time, I thought to myself, I will use the compost I make. That was, until the rat.

We aren’t far from the ocean, and well, there are rats in the neighborhood. Co-exisitng is possible, as long as there is nothing that forces me to actually see or think about my vermin neighbors. My wall of ignorance began to crumble as I added to the compost bin. It began with an occasional apple core that I knew had been in the compost at night, but was mysteriously in the middle of my garden the next morning. Or the tomato that had been transported from inside the locked compost bin to outside on my lawn. Suspiciously, I began to investigate and discovered evidence that rats are 1) smart critters (it had dug a burrow underneath my bin, providing easy access to all kinds of nasty/delicious treats) and 2) gross. This was serious business now. I had several years invested in composting, without even one cupful of black gold to show for it and no way was a rat gonna get the best of me.

I recruited the help of my landlord (I thought that was prudent) and my neighbor (I thought that was wise; he’s been gardening here for 30 years). Together we made a plan: catch the rat. After about two weeks, we did catch the rat. And his wife. And his brother and sister-in-law. Once the giant rat traps were no longer sprung in the early morning dew, we assumed that the rat clan had either been eliminated or gotten our message. I then removed my compost bin, got rid of the pile and started again. For the 4th time. This time, there would be no food scraps added to the bin, only paper and plant matter. I stretch that to include greens from the kitchen sometimes, but the memory of Mr. Smarty-pants Rat is never far.

Last summer I filled the bin, and it froze over the winter. This spring (it had compressed to about half), I turned it as best I could with a broom handle (I really need to get a pitchfork), added a bit of fish and seaweed fertilizer, added more grass clippings, leaves, newspaper etc. I was fiddling with it this week, when my daughter asked innocently, “When is that compost going to turn into dirt?” I mumbled some answer and fiddled and thought Huh, when indeed?  So I carefully pulled up the door on the bottom of the bin, and a few black crumbles tumbled out. I looked closely. Then I ran to get my handheld shovel, and scooped out a full pot of…well, black gold. There were a few sticks in it, which I tossed back into the bin. But mostly, this was a pot full of dark, rich, crumbly earth. It didn’t smell gross. It actually smelled heavenly, and I was giddy. One machine, two summers in Salem, three moves and four years later I had a pot full of black gold. It was worth it.

My first pot of actual compost

One thought on “That wasn’t as gross as I thought: Compost”